● The FBM KLCI drifted lower on Friday, taking cue from the weak close on Wall Street a day earlier and selling-pressure in selected blue chips. The key-index, however, closed 1.0% W.o.W higher on weekly basis, lifted by foreign buyinginterest. The lower liners – the FBM Small Cap (-1.0%), the FBM Fledgling (- 0.7%) and the FBM Ace (-0.8%) were also splashed in red, alongside all ten subsectors of the broader market.

● Market breadth took a turn for the worst as decliners beat advancers by more than two-fold, while traded volumes also fell slightly by 3.2% to 2.44 bln shares amid concerns over rising global interest rates. 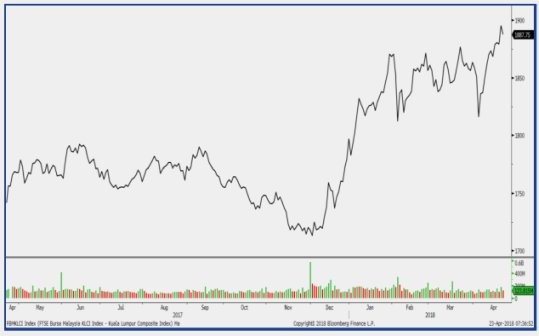 ● Key regional bourses took a beating, weighed down by losses in the technology sector following softer growth expectations by the world’s largest contract chipmaker, Taiwan Semiconductor Manufacturing (TSMC). The Nikkei (-0.1%) slide into the red, albeit offset by gains in financials and utilities-related stocks. The Hang Seng and the Shanghai Composite Index also closed 0.9% and 1.5% lower respectively, while ASEAN stockmarkets mostly declined.

● Meanwhile, Wall Street ended in the red - led by an extended selldown in U.S. bonds as well as selling-pressure in large cap tech names like Apple amid worries of slowing growth prospects. The Dow lost 0.8% to 24,462.9 points. On the broader market, the S&P (-0.9%) and Nasdaq (-1.3%) also tanked.


● Major European indices finished mostly higher on Friday, although losses in consumer products-related stocks weighed on upside. U.K. equities gained 0.5%, buoyed by the weaker Pound Sterling after Bank of England Governor Mark Carney dashed widespread expectations of an interest rate hike in May. The CAC was also up by 0.4%, but the DAX underperformed its peers, coming in 0.2% lower at 12,540.5 points.

● After the expected pullback at the end of last week following the surge to a new all-time high closing, the broad market environment is still one of uncertainty as there are few sustainable catalysts from both foreign and domestic sources. Hence, we think the downside bias is still prevalent for now as market players assess the market’s next direction.


● As it is, market interest is still thin and the gains have largely been supported by institutions on selective index heavyweights. In the absence of broadbased market support, we think that the upsides will be also limited, albeit we think the key index will continue to tether near its all-time high level. Hence, we see the key index lingering around the 1,880 and 1,890 levels for now.


● The lower liners and broader market shares are also seeing limited buying support despite finding some measure of support from its rout two months ago as a sense of wariness still prevails. Therefore, we think the lull on the above shares will remain for longer.

● Top Glove Corp Bhd has proposed a onefor-one bonus issue at a yet-to-be determined entitlement date, which will see up to 1.28 bln bonus shares issued to shareholders of the company. This proposal enables Top Glove to increase the number of shares in issue, which is expected to create more liquidity and marketability for its shares. (The Star Online)


● Under the MoU, Yinson shall oversee and conduct the overall project implementation, while Sumitomo will focus on seeking competitive logistics and financing for any selected projects. Both parties will also have a non-binding obligation to look into the field of energy infrastructure business. This includes liquified natural gas (LNG) related projects such as LNG regasification for the power industry and other similar offshore energy infrastructure opportunities. (The Star Online)


● Soo had earlier acquired a 15.0% stake in Sinotop from Managing Director Pan Ding. Soo has also agreed to provide an aggregate profit guarantee of RM50.0 mln for the financial year ending 2019, 2020 and 2021. The proposed purchase will be satisfied in cash or shares, or in combination of both.


● The company may also issue new Redeemable Convertible Preference Shares (RCPS) at an issue price of 42.0 sen and also considering a rights issue exercise on a basis of two new Sinotop shares for every one at an indicative issue price of 13.0 sen per rights share. The potential rights issue exercise would raise up to RM102.7 mln. (The Star Online)


● Tek Seng Holdings Bhd is appealing against a 22nd March 2018 court decision requiring its wholly-owned subsidiary, Wangsaga Industries Sdn Bhd to pay Tenaga Nasional Bhd (TNB) RM5.1 mln in arrears. The court had judged in favour of TNB, ruling that an outstanding sum of RM4.33 mln, together with an interest of 5.0% per annum and action costs of RM60,000, be paid by Wangsaga. (The Edge Daily)

● Daya Materials Bhd, a Practice Note 17 company, is in discussions with several parties including Siem Offshore Rederi AS to formulate a plan to regularise its financial condition. However, as at the date of this announcement, the company has not entered into any agreement with any party in relation to the regularisation plan.

The statement was issued in response to a local daily's report that Siem Offshore Rederi would emerge as Daya Material's largest shareholder with more than a 20.0% stake if the latter can undertake the successful implementation of a regularisation plan. (The Edge Daily)